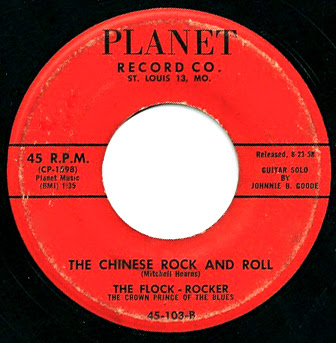 The Flock-Rocker
The Crown Prince Of The Blues 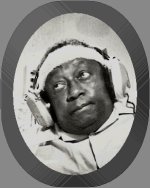 Born Mitchell Hearns, the Flock-Rocker, also known as Gabriel,  was born in Louisiana, he attended Lincoln High School in East St. Louis at the same time as Miles Davis.  Gabriel was buddies with Davis brother, Vernon Davis, and the two played in school bands together.  He had his own band in the 1950s that included the "Dean of St. Louis Electric Guitarists" Bennie Smith.

Through the years, Gabriel came to know many of the musical greats. Gabriel has hung out with Muddy Waters, Howlin Wolf and Chuck Berry. A buddy of another blues and rock elder, Ike Turner, Gabriel occasionally mentions on air that he used to shuttle Turners ex-wife, Tina Turner, to gigs because Ike trusted Gabriel not to make a pass at her.


He ran a record store called the House Of The Blues in St. Louis where he sold nothing but blues and gospel music. He owned part of the old Majestic Theater in East St. Louis, but problems with his business partner cost him more than $20,000 in the deal, a financial debacle from which he says he's never quite recovered.

" The first mistake I made was opening the thing up with a convicted felon, Gabriel says. He couldn't get a license, so I put up all the money for it. The thing went belly up, and they're still sending me bills. Now that place is on the registry of historic buildings. Who was the idiot there? Poor, dumb me. "

Gabriel was a personality on WOKZ in Alton, IL., in 1952, mixing blues and R&B with hillbilly records, jazz and the old standards.
His next stop was WTMV in East St. Louis where he did live remotes, moving across the river to KATZ where he started doing fill-in work for vacationing deejays. When PD Dave Dixon went on vacation, he asked Gabriel to take over his many remotes.
Gabriel was then hired to do the Sunday gospel shows on KATZ, which led to a full-time slot from 7:30 - 9:00 each night, for which he won the St. Louis Sentinel's award for Best Radio Personality. He later took the 1 - 6 a.m. slot from the late 1950s until 1969.   Then it was on to a year-long Sunday night stint on the market's most eclectic radio station, KDNA, which was supported solely by listener contributions.
He left the market briefly from 1973-1976, returning to a job at WESL. He ended up doing a weekly show on KDHX in 1989 on which he re-created the programs he had done in the 60s. In 1999 he won the Riverfront Times award as the Top St. Louis Radio Personality.
Gabriel produced and recorded some R&B and blues classics, including the first 45 by Tina Turner, which was recorded in Ike Turner's living room and kitchen on Virginia Place in East St. Louis in the late 50s. At various times he also ran a couple record stores, a theater featuring live music acts and a nightclub.

He only plays music out of his own collection. While KDHX has a large and varied music library, it pales in comparison to Gabriel's, which dates back to the 1920s and includes approximately 50,000 records, tapes and CDs.

During breaks, the portly man rolls up the sleeves of his blue and black flannel shirt and shuffles over to the suitcases, the cuffs of his faded black denim pants stopping at the tops of his dusty wingtips with worn soft rubber soles.

He flips through his tapes looking for some song that probably only he could remember. Gabriel has spent the better part of the past three years transferring his old vinyl sides to the computer so he can burn them onto CDs, which are easier for him to carry.

Back in the day, I would have four or five of those suitcases filled up with 45's, 78's and everything you can imagine, Gabriel says. That was like movin' your whole house.


Jim O'Neal, owner of Stackhouse Records has been working on a Gabriel collection for over a decade, hunting-down original 45s, 78s and acetates from all over the collector’s market  (from a now defunct website, http://www.realbluesmagazine.com/BluesNews.htm)  :

Jim O’Neal’s Stackhouse label will be releasing the much-anticipated compilation on the legendary The Flock Rocker (a.k.a. Gabriel & His Trumpet) who had over a dozen releases on the Planet, Norman, Tempora 500 and Royal American labels, all out of St. Louis/East St. Louis.   What’s really special about these recordings is that various members of Ike Turner’s Kings of Rhythm do backing along with the super-hot Bennie Smith on guitar. Jim has been working on this collection for over a decade, hunting-down original 45s, 78s and acetates from all over the Collector’s market.

Next Stackhouse release is the long-awaited compilation of 1950s and ‘60s sides by East St. Louis DJ, singer, and trumpet player Gabriel (he has a last name but doesn’t think you or the IRS need to know it) –- rocking, sometimes zany stuff including snippets from his radio shows and tracks with the great Bennie Smith on guitar. Gabriel still broadcasts every Sunday night at midnight on KDHX – check out his show at www.kdhx.org.


But I can't find any evidence that the compilation was ever released.  And Stackhouse Records seems to be inactive now
. 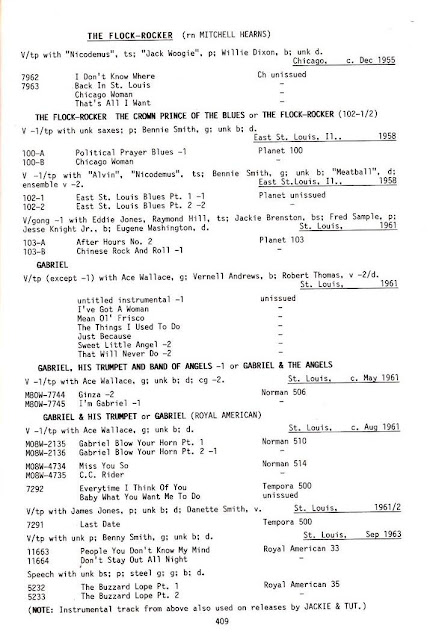 
Mitchel Hearns recorded as The Flock-Rocker,  Gabriel,   Gabrel, his trumpet and Band of Angels,  and Gabriel & the Angels.

Not to be confused with the Gabriel and the Angels on April, Amy and Swan  :


Gabriel and the Angels was the remnants of the FIVE SHARPS. A very popular combo consisting of Rick Kellis (Gabriel) on SAX, etc., Ed Badyna on Trumpet and Valve Trombone, Frank Pizzutello on Bass and Accordian, Rick Magee on Guitar, Larry Costanzo on Drums. Rick Kellis replaced the Original SAX man Joe Mariano who is also retired from the Insurance business. The FIVE SHARPS were very well known around N.J,PA,DE, and N.Y. Especially the Shore Points and Universities.