The Minister and the Nuns 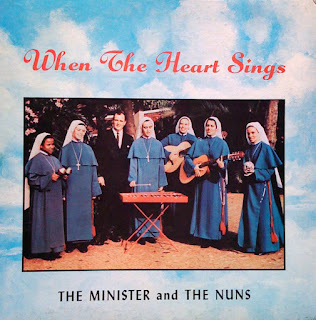 The Minister and the Nuns
(Rev. David Wayne Smith and the Congregation
of the Missionaries of Jesus the Crucified).

When The Heart Sings

A Good Friendship
Don't Let Evil Win Out Over You
Suffering
Mist
Read The Gospel
Hello! Hi There!

Yet The Sun Continues To Shine
A Little Bit Of Perfume
True Happiness
Life, Why're You Running
Your Smile

All selections written by Smith and Gomez copyrighted in Brazil


This record was made in Brazil by a group of six Brazilian Roman Catholic Nuns and an American Protestant Missionary.  The Rev. David Wayne Smith, a minister of the Presbyterian Church, U.S., who is interested in developing Christian leadership in Brazil, has been working there since 1963. Wayne is a former minister of South Charleston.

There was a Brazilian edition of this record.