The Barons on Key 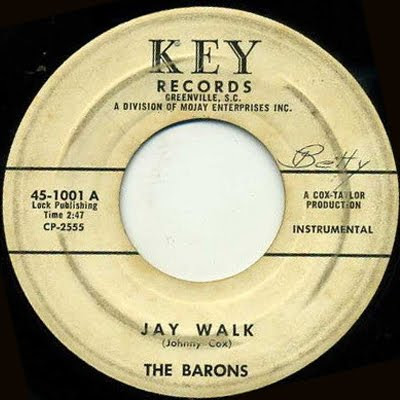 CP-2556 ~ If You Want A Little Lovin'
(Taylor-Christopher-Taylor) Much more commonly found label,
which is almost certainly a second pressing
(not Rite?)

Their first record. They also had records on the Midnite label, another imprint of Mojay enterprises. One was leased to V-Tone Records.

At 13, Johnny Cox cut his first record with the Barons. It was called “Jaywalk”, a song he wrote and played on his saxophone. He was recruited by a band called the “Sparkletones”. The group had a hit called “Black Slacks” and appeared on the Ed Sullivan Show. Johnny toured with them in Canada, playing sax, at the age of 14. Upon his return home, his 6-year old sister kissed his hand over and over because it was the hand that shook the hands of Ricky Nelson, Fabian, and Paul Anka!!!

Later he was a member of The Jays, The Swingin’ Medallions, Sassy, Rhythm Brothers, Griff & Johnny, The Out-of-Towners Band, and many more.