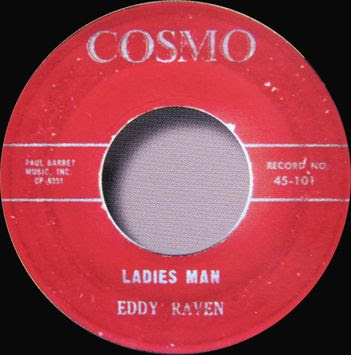 Eddy Raven (born Edward Garvin Futch, August 19, 1944 in Lafayette, Louisiana) charted a string of hit singles on the country music charts between 1974 and 1991.

Influenced by Cajun music, the country music sounds from popular radio broadcasts such as the Louisiana Hayride, New Orleans blues, and the new sounds of rock and roll, Raven developed his own unique sound. His songwriting abilities led to him being signed by Don Gant to a publishing deal with Acuff-Rose Music that eventually led to him moving to Nashville, Tennessee where he started recording for himself in 1974.

For three of his teenage years, Eddy Raven lived in Southeast Georgia, in Cobbtown, Metter and Baxley. He attended Metter High School and started his musical career while living in this area. That's where he recorded the Cosmo single, in a radio studio.

It was in the school auditorium of Cobbtown, in the middle of the Georgia Tobbacco Belt halfway between Metter and Reidsville, that Eddy made his first stage appearance in 1961. He decided then and there that he would rather write and sing songs than work for Uncle Troy making flues for tobacco-curing barns in Metter.

Check out the 30 minute interview with the singer on Y-101, a local Georgia radio :